Saoirse Ronan is an Irish-American actress. She is best known for her roles as Briony Tallis in the 2007 romantic drama war film Atonement and Éilis Lacey in the 2015 film Brooklyn. She played Susie Salmon in the 2009 American supernatural drama film The Lovely Bones. She received two Academy Award nominations for Atonement and Brooklyn. She debuted as Celia Hardwick in the 2007 British film The Christmas Miracle of Jonathan Toomey. Born Saoirse Una Ronan in The Bronx, New York City, New York, United States, to Irish parents, Monica and Paul Ronan, she grew up in County Carlow, Ireland. 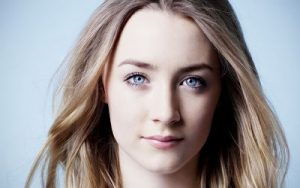 Saoirse Ronan Facts:
*She is an only child.
*She moved from New York to Ireland when she was 3 and has lived there ever since.
*She has dual citizenship of Irish and American.
*She had a border collie dog named Sassie.
*In 2008, she was placed at number 23 on Entertainment Weekly’s ’30 Under 30′ the actress list.
*She supports English football club Manchester United.
*She is good friends with Aly Michalka and AJ Michalka.