Sarah Gadon is a Canadian actress. She is best known for her roles in the films Belle, A Dangerous Method, Antiviral, Enemy, Cosmopolis, The 9th Life of Louis Drax, Dracula Untold, Indignation, and A Royal Night Out. In 2016, Gadon starred as Sadie in the Hulu miniseries 11.22.63, an adaptation of Stephen King’s novel 11/22/63, and played Grace Marks in the 2017 CBC miniseries Alias Grace. Other notable acting roles include Heather in The Other Me, Sarah in Phantom of the Megaplex, Zoe Kessler in The Border, Katie Atkins in Being Erica, Ruby Ogden in Murdoch Mysteries, Georgia Bravin in Happy Town, Philippa in World Without End, Gae in Letterkenny, and Val in Most Dangerous Game. She has also done voice work in Mattimeo: A Tale of Redwall, My Dad the Rock Star, Time Warp Trio, Ruby Gloom, Friends and Heroes, Total Drama, and Total DramaRama. She earned two Canadian Screen Awards, for her performances in Alias Grace and Denis Villeneuve’s Enemy. Born Sarah Lynn Gadon on April 4, 1987 in Toronto, Canada, to parents Linda, a teacher, and Michael, a psychologist, she has an older brother named James. She belongs to both English and Italian descent. Gadon graduated high school as an Ontario Scholar from Vaughan Road Academy in 2005, and studied cinema at the prestigious University of Toronto. She has been in a relationship with film editor and director Matthew Hannam since 2015. 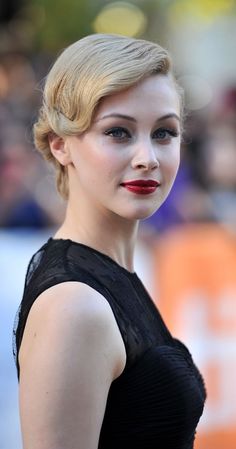 Sarah Gadon Facts:
*She was born on April 4, 1987 in Toronto, Canada.
*Growing up, she spent much of her time learning and performing dance.
*She knows ballet and modern dance.
*She started acting at the age of 10, appearing in an episode of La Femme Nikita (1998).
*She received the Award of Excellence by the Alliance of Canadian Cinema, Television, and Radio Artists (ACTRA) in 2016.
*Follow her on Twitter and Instagram.