Sarah Jessica Parker is an American actress of film, television, and theatre. She is best known for her portrayal of Manhattan sex-columnist Carrie Bradshaw in the HBO series Sex and the City, for which she won two Emmy Awards, four Golden Globe Awards for Best Actress in a Comedy Series and three Screen Actors Guild Awards. She also reprised the role in films Sex and the City and Sex and the City 2. She is also known for appearing in television shows, such as Square Pegs, A Year in the Life, Divorce, and Equal Justice, and also the films Hocus Pocus, Footloose, Ed Wood and Failure to Launch. Born on March 25, 1965 in Nelsonville, Ohio, to parents Barbara and Stephen Parker, she is of Jewish descent on her father’s side, and of German, and some English descent on her mother’s side. Her parents divorced when she was age 3½, and her mother married Paul Forste, a truck driver and account executive. Parker attended the School for the Creative and Performing Arts (SCPA) in Cincinnati, and studied drama at HB Studio in Greenwich Village in New York City. In 1997, she married Matthew Broderick with whom she has three children. 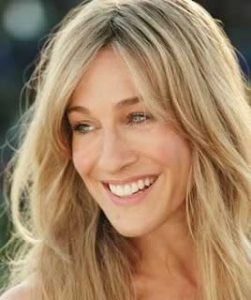 Sarah Jessica Parker Facts:
*She was born on March 25, 1965 in Nelsonville, Ohio, USA.
*Her parents divorced when she was 3½ years old.
*Growing up, she trained in both singing and ballet.
*She made her first television special at the age of eight.
*She made her Broadway debut at the age of 11 in the 1976 revival of The Innocents.
*She hosted the MTV Movie Awards in 2000.
*She is close friends with actors Willie Garson and Ron Rifkin.
*She has her own line of handbags.
*She dated actor Robert Downey, Jr. from 1984 to 1991.
*Follow her on Twitter, Facebook and Instagram.