Sasha Pivovarova is a Russian fashion model and actress, best known for appearing in ads for brands like Prada, H&M, Giorgio Armani, and Hugo Boss. She has appeared on the cover of fashion magazines such as Vogue and Numero. Sasha has worked with top designers like Christian Dior, Valentino, and Elie Saab. She made her film debut in the science-fiction thriller In Time (2011). Born Aleksandra Igorevna Pivovarova on January 21, 1985 in Moscow, Russia, her father is Igor Pivovarov. Following her high school graduation, Pivovarova studied Art History at the Russian University for the Humanities. She is married to photographer Igor Vishnyakov, with whom she has a daughter, Mia Isis. 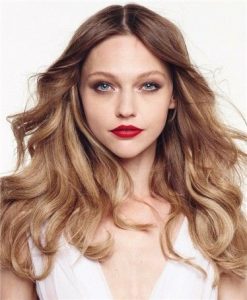 Sasha Pivovarova Facts:
*She was born on January 21, 1985 in Moscow, Russia.
*Her first ever runway show was for Prada.
*She became the longest appearing fashion model for Prada, having been in 19 different AD Campaigns.
*In November 2008, Sasha was named as Prix International Best Model at the Prix de la Moda awards organized by Marie Claire magazine.
*She walked the Christian Dior, Chanel, Elie Saab, and Valentino couture shows in Paris in January 2009.
*In December 2011, Sasha launched her sleepwear collection that she had created in collaboration with Gap.
*She made her acting debut in the sci-fi thriller movie, In Time (2011).
*She used sketchbooks as her diaries.
*She enjoys painting and drawing in her free time.
*She has been a vegetarian for 12 years.
*Follow her on Twitter and Instagram.