Sasheer Zamata is an American actress and comedian who was a cast member of Saturday Night Live for four seasons from January 18, 2014, until May 20, 2017. Her other well-known television include Fodder, CollegeHumor Originals, UCB Comedy Originals, Pursuit of Sexiness, People of Earth, Transparent, and Loosely Exactly Nicole. She has also appeared in such films as Sleight, Yoga Hosers, The Outdoorsman, Deidra & Laney Rob a Train, and I Feel Pretty. She has also done voice work for Call of Duty, Bojack Horseman, Lucas Bros. Moving Co., and Albert (Nickelodeon). Born Sasheer Zamata Moore on May 6, 1986 in Indianapolis, Indiana, USA, to Ivory Steward and Henry Moore, she started her entertaining career in 2009. She studied at Pike High School and earned a Bachelor of Arts degree from the University of Virginia in 2008. In January 2014, she began appearing on Saturday Night Live, and was the first black woman on the show since 2007. 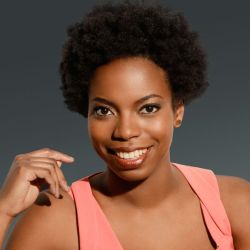 Sasheer Zamata Facts:
*She was born in Indianapolis, Indiana, USA on May 6, 1986.
*She was named after “Sasheer” a crystalline substance named in Star Trek: By Any Other Name.
*She is best known as a cast member on the comedy show Saturday Night Live.
*She has served as a celebrity ambassador for the ACLU.
*Visit her official website: www.sasheer.com
*Follow her on Twitter and Instagram.