Katee Sackhoff is an American actress of film and television. She is best known for playing the role of Lieutenant Kara “Starbuck” Thrace on the Sci Fi Channel’s television program Battlestar Galactica, for which she was nominated for four Saturn Awards and won the award for Best Supporting Actress on Television in 2005. Her other notable television credits include The Fearing Mind, The Education of Max Bickford, Bionic Woman, Nip/Tuck, CSI: Crime Scene Investigation, Star Wars: The Clone Wars, and 24. She has also starred in the films Halloween: Resurrection, White Noise: The Light, Batman: Year One, The Haunting in Connecticut 2: Ghosts of Georgia, Sexy Evil Genius, Riddick, Oculus and Don’t Knock Twice. Born Kathryn Ann Sackhoff on April 8, 1980 to Mary and Dennis Sackhoff, she was raised in St. Helens, Oregon. She has an older brother named Erick. She is a 1998 graduate of Sunset High School. She has been in a long term relationship with Karl Urban. 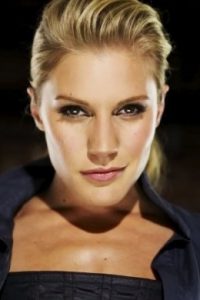 Katee Sackhoff Facts:
*She was born in Portland, Oregon, USA on April 8, 1980.
*She began swimming at an early age.
*She is a vegetarian.
*She used to work as a waitress at the Saddle Ranch Chop House before she got her big break.
*She has three tattoos on her body, one of a Japanese symbol for choice, crucifix on her left shoulder and a Latin phrase for “public property” on her right arm.
*She is best friends with Battlestar Galactica co-star Tricia Helfer.
*She has two dogs named “Meatball” and “Nelly B”.
*Follow her on Twitter, Facebook and Instagram.