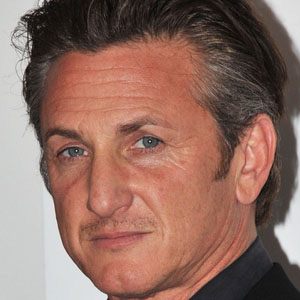 Sean Penn is an American actor and filmmaker who won two Academy Awards, for his roles in the mystery drama Mystic River and the biopic Milk. He has also starred in the fims Taps, Fast Times at Ridgemont High, Colors, Casualties of War, We’re No Angels, Carlito’s Way, Dead Man Walking, U Turn, The Game, The Thin Red Line, Being John Malkovich, The Weight of Water, I Am Sam, 21 Grams, The Assassination of Richard Nixon, The Interpreter, All the King’s Men, Persepolis, Fair Game, The Tree of Life and This Must Be the Place. Penn made his directorial debut with the 1991 crime drama film The Indian Runner. He is also notable for being an outspoken and often controversial political and social activist.

Born Sean Justin Penn in Santa Monica, California, to actress Eileen Ryan (née Annucci) and director, actor, and writer Leo Penn, he is the middle brother of musician Michael Penn and Chris Penn. He is of Ashkenazi Jewish descent on his father’s side, and of English and Irish descent on his mother’s side.

Penn was married to pop star and actress Madonna from 1985 to 1989. He later married actress Robin Wright, but divorced her in 2010. He was briefly engaged to actress Charlize Theron in 2015. He married Leila George in 2020. He has a son named Hopper and a daughter named Dylan.

Sean Penn Facts:
*He was born on August 17, 1960 in Santa Monica, California, United States.
*He began making short films with some of his childhood friends including actors Charlie Sheen and Emilio Estevez.
*He won the Academy Award for Best Actor for his roles in the films Mystic River and Milk.
*His childhood friends are actors Charlie Sheen and Emilio Estevez.
*He released his first novel, Bob Honey Who Just Do Stuff, in March 2018.
*He is an ardent surf enthusiast.
*Follow him on Twitter.