Sendhil Ramamurthy is an American television and movie actor. He is best known for television roles as Mohinder Suresh in NBC’s Heroes, and Jai Wilcox in the spy series, Covert Affairs. From 2013 to 2014, he played Gabriel Lowen, an assistant district attorney in the CW show Beauty & the Beast. In 2018 he stars in the series Reverie. Sendhil has also appeared in such films as In the Beginning (2000), It’s a Wonderful Afterlife (2010), and 2011 Indian crime comedy-drama film Shor in the City. In 2016, he provided his voice for Simon Masrani in Lego Jurassic World: The Indominus Escape. Born Sendhil Amithab Ramamurthy on May 17, 1974 in Chicago, Illinois, USA, to a Kannadiga Indian father and a Tamil Indian mother, his family had emigrated from Tamil Nadu, India. His parents are physicians. He has one sister who is also a physician. He graduated from Keystone School in San Antonio, Texas in 1992, and graduated from Tufts University in 1996 with a bachelor’s degree in history. He also attended the Webber Douglas Academy of Dramatic Art in London in 1996, graduating in 1998. He has been married to actress Olga Sosnovska since 1999. They have two children: daughter Halina and son Alex. 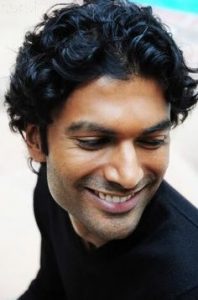 Sendhil Ramamurthy Facts:
*He was born on May 17, 1974 in Chicago, Illinois, United States.
*He is of Indian heritage.
*His mother is Tamil, and his father is Kannada.
*He and his sister, who is a physician, were raised in San Antonio.
*He is the cousin of comedian and film director Jay Chandrasekhar.
*He studied drama in England.
*He was a member of the Kappa Charge of Theta Delta Chi.
*He is close friends with Milo Ventimiglia.
*Follow him on Twitter, Facebook and Instagram.