Serena Williams is an American professional tennis player and former world No. 1. Having made her professional debut in 1995, Williams has won 23 Grand Slam singles titles and several Olympic gold medals. She has won 14 Grand Slam doubles titles alongside her older sister Venus Williams. She set the record for most singles titles at the Australian Open with seven. Born as Serena Jameka Williams on September 26, 1981 in Saginaw, Michigan, to Oracene Price and Richard Williams, she is the youngest of 5 girls. She began playing tennis at age 3. She earned her first career grand slam singles title at the U.S. Open back in 1999 by defeating Martina Hingis. She married reddit co-founder Alexis Ohanian in 2017. They have a daughter together. 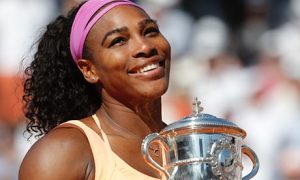 Serena Williams Education:
She was homeschooled.
The Art Institute of Fort Lauderdale

Serena Williams Facts:
*She is the younger sister of Venus Williams.
*She was introduced to tennis at the age of 3.
*With her sister Venus, she was home-schooled by her father, who was also her coach.
*She is fluent in English, French, Italian and Spanish.
*She is a huge Olympic pin collector.
*She has two dogs, named, Laura and Jackie.
*Visit her official website: www.serenawilliams.com
*Follow her on Twitter, Facebook and Instagram.