Tom Cruise is an American film actor and producer. He is best known for playing the role of IMF agent Ethan Hunt in the Mission: Impossible film series since 1996. He has also starred in the films Risky Business, A Few Good Men, Jerry Maguire, Rain Man, Magnolia, Born on the Fourth of July, Top Gun, The Firm and Jerry Maguire. He portrayed Ray Ferrier in the movie adaption of War Of The Worlds. He has been nominated for three Academy Awards and has won three Golden Globe Awards. Born Thomas Cruise Mapother IV on July 3, 1962 in Syracuse, New York, to Mary and Thomas Mapother, his mother was an amateur actress and schoolteacher, and his father was an electrical engineer. His parents got divorced when he was eleven years old. He belongs to Irish, English and German descent. He has three sisters, Lee Ann Mapother, Marian Mapother and Cass Mapother. He had planned to become a priest before becoming interested in acting. He made his film debut with a minor role in the 1981 romantic drama Endless Love. He has been married three times and has two daughters named Isabella and Suri and a son named Connor. 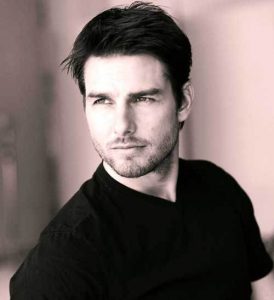 Tom Cruise Facts:
*His father,Thomas Mapother III, was an electrical engineer and his mother, Mary Lee Pfeiffer, worked as a special education teacher.
*He purchased his first motorcycle when he was just 12.
*He started his career at age 19 in the film Endless Love.
*He was the world’s most powerful celebrity of 2006 as per Forbes.
*One of People magazine’s 50 Most Beautiful People in the World (1990, 1991, 1997).
*In 1990, he was chosen as People magazine’s “Sexiest Man Alive”.
*He is a big fan of singer Joss Stone.
*He was considered for the role of Obi-Wan Kenobi in Star Wars: The Phantom Menace.
*He became the most well-known member of the Church of Scientology.
*His loves skydiving, scuba diving, and piloting his Pitts Special S-2B stunt plane.
*He has a cat called Harvey and two dogs called Basil and Murray.
*Visit his official website: www.tomcruise.com
*Follow him on Twitter, Google+, YouTube, Facebook and Instagram.