Sharon Gless is an American actress. She is best known for her portrayal of Chris Cagney on the police series Cagney & Lacey (1982–88). Sharon is also known for roles such as Maggie Philbin on the CBS private detective/con artist series Switch (1975–1978), Rosie O’Neill in The Trials of Rosie O’Neill (1990–92), Debbie Novotny in the Showtime cable television series Queer as Folk (2000–2005), and as Madeline Westen on Burn Notice (2007–2013). She has also appeared in the films The Star Chamber (1983), Hannah Free (2009), and Once Fallen (2010). Born Sharon Marguerite Gless on May 31, 1943 in Los Angeles, California, USA, to Marjorie McCarthy and Dennis J. Gless, she was raised Roman Catholic. She has two brothers named Aric and Michael. She married Barney Rosenzweig, the producer of Cagney & Lacey, in 1991. 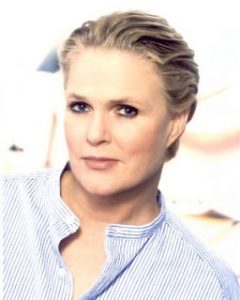 Sharon Gless Facts:
*She was born on May 31, 1943 in Los Angeles, California, USA.
*Her parents got divorced during her teenage years.
*She used to work as a secretary for the advertising agencies Grey Advertising and Young & Rubicam.
*As an actress, she was highly influenced by Eddie Albert.
*Sharon received a star on the Hollywood Walk of Fame in 1995.
*In 1990, a female fan was sentenced to six years for breaking into her home with a rifle.
*Visit her official website: www.sharongless.com
*Follow her on Twitter, Facebook and Instagram.

Oh, Look! Another pic of me. But this time it’s worthy, cause I am with the extraordinary staff of the Stonewall Museum in Wilton Manors Pride Day. Photo by Steve Rothaus/ Miami Herald!