Shashi Kapoor was an Indian actor, film director and producer. One of the leading actors of Indian cinema, Shashi Kapoor appeared in over 175 films including 12 English-language films. He began appearing on stage from the age of four. His notable film credits include Jab Jab Phool Khile, Deewaar, Kabhi Kabhie, Junoon, Kalyug, Namak Halaal, New Delhi Times and In Custody. Born Balbir Raj Kapoor in Calcutta, Bengal Presidency, on March 18, 1938, to Ramsarni and Prithviraj Kapoor, he is the younger brother of actors Raj Kapoor and Shammi Kapoor. He died of prolonged liver cirrhosis in Kokilaben Hospital, Mumbai at age 79. 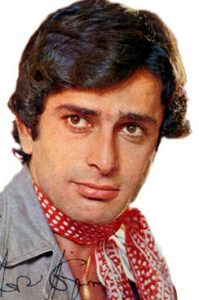 Shashi Kapoor Facts:
*The son of Prithviraj Kapoor, and brother of Raj Kapoor and Shammi Kapoor.
*He appeared in Hindi and English films as the lead hero.
*From 1948 to 1954, he appeared in four Hindi films as a child artiste.