Arsenio Hall is an American comedian and talk show host from Cleveland, Ohio. He is most famous for his groundbreaking talk show The Arsenio Hall Show. He made cameos in several movies and shows like Celebrity Apprentice. He also hosted the early pilot episodes of the American daytime version of the game show Deal or No Deal in 2005. In 2012, he won NBC’s reality competition show Celebrity Apprentice 5. He was awarded a Star on the Hollywood Walk of Fame at 6776 Hollywood Boulevard in Hollywood, California on November 7, 1990. Born on February 12, 1956 in Cleveland, Ohio, to Fred and Anne Hall, he performed as a magician when he was a child. After graduating from Warrensville Heights High School in Warrensville Heights, Ohio, he attended Ohio University and Kent State University. He has one son named Arsenio Cheron Hall Jr. with Cheryl Bonacci. 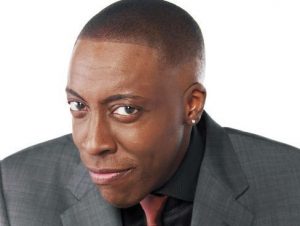 Arsenio Hall Facts:
*He was the first black late-night talk show host.
*He was an accomplished magician as a child.
*He cites Don Cornelius as his favorite idol, growing up, watching him on Soul Train (1971).
*He is friends with Eddie Murphy, Nancy Wilson, Joan Rivers, Magic Johnson, and Tiffany Haddish.
*Visit his official website: www.arseniohall.com
*Follow him on Twitter, Facebook and Instagram.