Shraddha Kapoor is an Indian film actress and singer who works in Bollywood films. She is best known for her portrayal of Arohi Keshav Shirke, a singer in the 2013 romantic musical drama film Aashiqui 2, for which she earned her a Filmfare nomination for the Best Actress. She made her screen debut with a small role in the 2010 heist film Teen Patti. Her other notable film credits include Ek Villain, ABCD 2, and the 2016 film Baaghi. She was born on March 3, 1989 in Mumbai, India. She is the daughter of veteran Indian actor, Shakti Kapoor and bollywood singer and actress Shivangi Kapoor, and sister to Bollywood actor Siddhanth Kapoor. 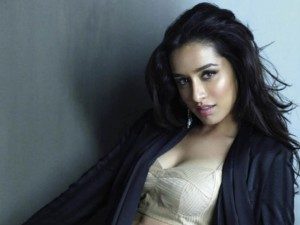 Shraddha Kapoor Facts:
*She is the daughter of actor Shakti Kapoor.
*She had her breakout role in 2013 film Aashiqui 2.
*She is a spokesperson for the Anglo-Dutch beauty brand Vaseline and as well as for the Indian beauty brand Lakmé.
*Follow her on Twitter, Facebook and Instagram.