English actress who is most famous for her portrayal of Julia McNamara in the television drama series Nip/Tuck, and as Queen Catherine Parr in the historical fiction television series The Tudors. For her role in Nip/Tuck, she received a Golden Globe nomination in 2005. Her other notable film credits include 101 Dalmatians, Event Horizon, Anonymous, The Patriot, Return to Me, the Hollywood film adaptation The Girl with the Dragon Tattoo, and the remake of Endless Love. Joely was born Joely Kim Richardson on January 9, 1965 in Marylebone, London, England, to British director Tony Richardson and actress Vanessa Redgrave. She was married to Tim Bevan from 1992 to 2001. Her daughter Daisy Bevan, also became an actress. 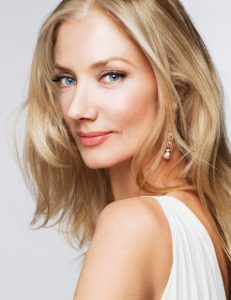 Joely Richardson Education:
She and her sister Natasha Richardson, both attended the St Paul’s Girls’ School in Hammersmith.
She then attended the Harry Hopman Tennis School in Tampa, Florida, and graduated from the Thacher School in Ojai, California in 1983.
She attended the Royal Academy of Dramatic Art where she studied acting.