Silvia Navarro is a Mexican actress who appears mainly in telenovelas. Her notable credits include Mi corazón es tuyo, Mañana es para siempre, Cuando me enamoro and Amor Bravío. For her performance in the telenovela, Amor Bravío, she earned a 2013 Premios TV Adicto Golden Award. Born Silvia Angélica Navarro Barva on September 14, 1978, in Irapuato, Guanajuato, Mexico, she is the daughter of Loyda and Luis Navarro Tinajera. Since 2012, she is in a relationship with Gerardo Casanova, with whom she has a son Léon born in 2015. 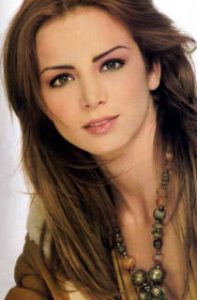 Silvia Navarro Facts:
*She was born in Irapuato, Guanajuato, Mexico.
*As a child, she began appearing on commercials.
*People en Español magazine named her one of the top 50 Most Beautiful People in the World in May 2012.
*She dated Mexican actor Fernando Alonso from 2007 to 2010.
*Follow her on Twitter and Instagram.