Simona Halep is a Romanian professional tennis player who was named WTA’s Most Improved Player in 2013. Halep started playing tennis at the age of 4. She won her first 6 WTA titles in the same calendar year in 2013. Since turning professional in 2006, she has won 18 WTA singles titles, including two majors, the 2018 French Open and the 2019 Wimbledon Championships. She has been ranked #1 in singles on two separate occasions between 2017 and 2019. Born on September 27, 1991 in Constanța, Romania, to parents Stere and Tania Halep, she has an older brother named Nicolae. She belongs to Aromanian descent. 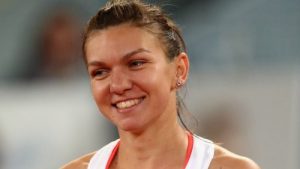 Simona Halep Facts:
*She started playing tennis at the age of 4.
*She is of Aromanian descent.
*Her Brother Nicolae Inspired Her Love of Tennis.
*She became Romania’s top-ranked tennis player in 2013.
*She was WTA’s Most Improved Player in 2013.
*She won her first 6 WTA titles in the same calendar year in 2013.
*She won the 2018 French Open singles title.
*She won the Wimbledon championships in 2019, beating Serena Williams in two straight sets.
*Father is a Former Soccer Player Who Owned a Dairy Factory.
*Her cousin Nicica Arghir Committed Suicide at Age 29 in 2015.
*She is a passionate follower of the Romania national team, and admires Cristiano Ronaldo and Lionel Messi.
*Visit her official website: www.simonahalep.com
*Follow her on Twitter, Facebook and Instagram.