Singer and rapper Becky G is best known for her hit singles “Becky from the Block”, “Play it Again” and “Oath” (feat.Cher Lloyd). Born Rebbeca Marie Gomez in Inglewood, California, she is the daughter of Frank Gomez and Alejandra Gomez, and has two brothers, Frankie and Alex, and a sister, Stephanie. She belongs to Mexican descent. 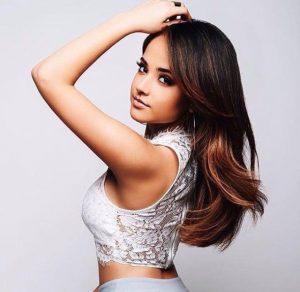 Becky G Education:
She was home-schooled due to being bullied at her school.

Becky G Favorite Things:
Her favorite rapper is Lauryn Hill.
She loves to eat sour things and eats lemons on their own as a snack

Becky G Facts:
*She was discovered after uploading videos of herself dancing and singing on YouTube in 2011.
*She began acting to financially support her family at Age 9.
*She Started Rapping at Age 11.
*She loves to eat sour things and eats lemons on their own as a snack.
*Jennifer Lopez, Christina Aguilera, Thalia and Selena are her music influences.
*She is a big fan of Justin Bieber and Justin also become her fan after watching the remix of “Die Young”.
*She is featured on Ke$ha’s 2012 remix to her song “Die Young” as well as Cody Simpson’s 2012 hit single “Wish U Were Here.”.
*Follow her on Twitter, Facebook, YouTube, Google+, and Instagram.