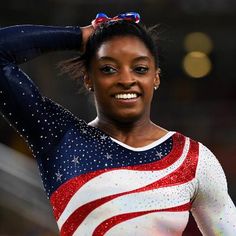 Simone Biles Facts:
*She was born on March 14, 1997 in Columbus, Ohio, USA.
*Her father served in the Air Force for 21 Years.
*She made her senior international gymnastic debut in March 2013.
*She is the world’s third most decorated gymnast, behind Belarus’ Vitaly Scherbo (33 medals) and Russia’s Larisa Latynina (32 medals).
*She set a new American record for most gold medals in women’s gymnastics at a single game.
*She is friends with Laurie Hernandez.
*She has a celebrity crush on Zac Efron.
*Lifetime made a movie about her titled The Simone Biles Story: Courage To Soar in 2018.
*She has a French bulldog named Lilo.
*Visit her official website: www.simonebiles.com
*Follow her on Twitter, Facebook and Instagram.