Phoebe Waller-Bridge is an English actress, writer, and producer who created, wrote, and starred in the Channel 4 comedy-drama series Crashing and the BBC tragicomedy series Fleabag. Waller-Bridge is also notable for acting roles in the comedy series The Café and the second series of crime drama Broadchurch and has appeared in several films, including Albert Nobbs, The Iron Lady, Goodbye Christopher Robin, and as L3-37 in the Star Wars film Solo: A Star Wars Story. She was also the show-runner and executive producer for the first series of the BBC America thriller series Killing Eve. She received the Critics’ Choice Television Award for Best Actress in a Comedy Series for Fleabag in 2016. Born Phoebe Mary Waller-Bridge on July 14, 1985 in Ealing, London, United Kingdom, to parents Theresa Mary and Michael Cyprian Waller-Bridge, she has an older brother named Jasper and a younger sister named Isobel. She attended the St Augustine’s Priory, a Catholic independent school for girls, followed by the independent sixth form college DLD College London in the Marylebone area of London. She graduated from the Royal Academy of Dramatic Art. She was married to director Conor Woodman from 2014 to 2018. She has been in a relationship with writer-director Martin McDonagh since 2018. 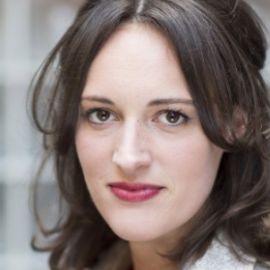 Phoebe Waller-Bridge Facts:
*She was born on July 14, 1985 in Ealing, London, United Kingdom.
*Her father, Michael Cyprian Waller-Bridge, founded the electronic trading platform Tradepoint, while her mother, Theresa Mary Waller-Bridge, works for the Worshipful Company of Ironmongers.
*She was raised in Ealing in West London.
*She is the older sister of Isobel Waller-Bridge.