Skeet Ulrich is an American actor, best known for his roles as Billy Loomis in Scream and Chris Hooker in The Craft. His television credits include Jericho, Miracles, and Robot Chicken. In 2017, he began starring as FP Jones on The CW drama Riverdale. Born Bryan Ray Trout on January 20, 1970 in Lynchburg, Virginia, his mother owns the special events marketing agency Sports Management Group, and his father is a restaurateur, and his first stepfather was D. K. Ulrich, a NASCAR driver and team owner. He has one older brother named Geoff. He attended at Northwest Cabarrus High School and studied marine biology at the University of North Carolina at Wilmington. He had twins, son Jakob Dylan and daughter Naiia Rose with English actress Georgina Cates, whom he was married to from 1997 until 2005. He married Amelia Jackson-Gray in 2012, and they divorced in 2015. 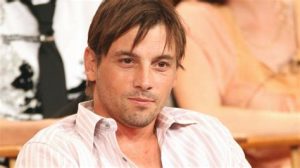 Skeet Ulrich Facts:
*He was born on January 20, 1970 in Lynchburg, Virginia, USA.
*He grew up in Concord, North Carolina.
*His maternal uncle is retired Monster Energy NASCAR Cup Series driver Ricky Rudd.
*He was engaged to model Rose Costa from 2016 to November 2017.
*Follow him on Instagram.