Sonia Grey is an Italian actress, showgirl and television presenter. She became famous following her appearances on the Italian television program Striscia la notizia. She has also appeared in several comedy shows on the network Fininvest including Sabato al circo, led by the duo Gigi e Andrea, and Yogurt – Fermenti attivi. As a showgirl, she has participated in various programs, such as Il gioco dei 9, Sabato al circo, Il TG delle vacanze, Televiggiù and Didomenica. She played a small role in the 1991 film Abbronzatissimi. Born on August 30, 1968 in Rho, Lombardy, Italy, her birth name is Sonia Colone. She earned her degree in Communication Science, Information and Marketing and a master’s degree in neuro-linguistic programming (NLP). She began her acting career in 1988, appearing in the show Dibattito! as Gianni Ippoliti on Italia 1. 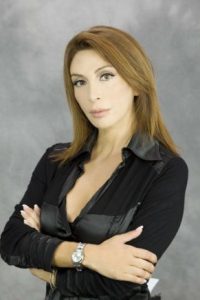 Sonia Grey Education:
She earned her degree in Communication Science, Information and Marketing and a master’s degree in neuro-linguistic programming (NLP).