English actress Sophia Myles was born Sophia Jane Myles on March 18, 1980 in London, England, the daughter of Jane and Peter Myles. Her mother, Jane, works in educational publishing, and her father, Peter R. Myles, is a retired Church of England vicar in Isleworth, West London. Her maternal grandmother was Russian, and Myles refers to herself as “half-Welsh, half-Russian”. Sophia is best known for portraying Erika in Underworld, Lady Penelope Creighton-Ward in the live-action Thunderbirds film, Isolde in Tristan & Isolde and Beth Turner in Moonlight. Sophia has a perfect body which measures breast 36, waist 26 and hip 35. She has a height of 5 feet and 6 inches which is around 168 cm. She wears a size 7 shoe. Her zodiac sign is Pisces. 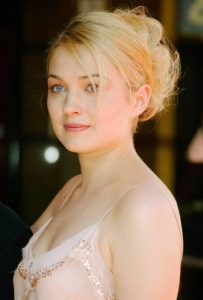 Sophia Myles Facts:
*She can speak French and German.
*She appeared in two Underworld films with Kate Beckinsale.
*Her skills include horse riding, skiing, skating, swimming.
*Her favorite film is the adventure-comedy film The Goonies (1985).
*She had a long relationship with Charles Dance which eventually ended.
*She began dating David Tennant after filming an episode of Doctor Who.