Stanislas Wawrinka, Swiss professional tennis player, who turned professional in 2002, when he was 17 years old. He is the winner of 2014 Australian Open, 2015 French Open, and 2016 US Open. He also won a gold medal in men’s doubles event at the 2008 Summer Olympics, alongside the great Roger Federer. Wawrinka was born in Lausanne, Vaud, Switzerland to Swiss mother, Isabelle, and German father, Wolfram. He grew up with his elder brother, Jonathan, and his two younger sisters, Djanaée and Naélla, who are also tennis players. He has a daughter, Alexia, born in 2010. He was married in 2009 to Ilham Vuilloud, a Swiss television presenter and former fashion model, but divorced in 2015. 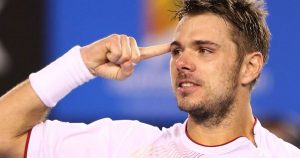 Stanislas Wawrinka Facts:
*At age 17, Wawrinka turned professional in 2002.
*He started hitting tennis balls at the age of eight.
*He stopped attending regular schooling at age 15 to pursue tennis full-time.
*He is known for his powerful one-handed backhand, dominant service game and volley shot.
*He appeared in the 2015 ESPN body issue, posing nude in athletic poses.
*He was chosen for the 2015 Swiss Sportsman of the Year award.
*He is in a relationship with tennis player Donna Vekić.
*He has a tattoo on his left forearm in italic script that quotes the Irish writer Samuel Beckett in English: “Ever tried. Ever failed. No matter. Try Again. Fail again. Fail better.” On his right arm, he has his daughter’s name.
*Follow him on Twitter, Facebook and Instagram.