Steph McGovern is a British journalist and television presenter, best known for her work on BBC Breakfast. She is also notable for her work on Pocket Money Pitch, Shop Well for Less?, Watchdog, Have I Got News For You, and Made in Great Britain. Born Stephanie Rose McGovern on May 31, 1982 in Middlesbrough, United Kingdom, she studied Science Communication and Policy in the Department of Science and Technology Studies at University College London. She began working for BBC’s Tomorrow World programme. On November 8, 2019, McGovern revealed she had given birth to a baby girl. 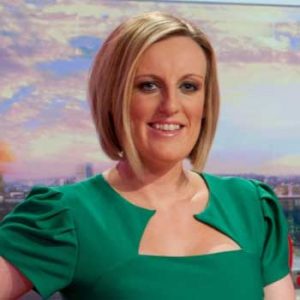 Steph McGovern Facts:
*She was born on May 31, 1982 in Middlesbrough, United Kingdom.
*Her birth name is Stephanie Rose McGovern.
*She was a former champion Irish dancer.
*She was awarded ‘Young Engineer for Britain’ at the age of 19.
*She was awarded an Honorary Doctorate by Teesside University in 2013.
*She started at the BBC doing work experience on the Tomorrow’s World programme.
*She has been BBC Breakfast’s main business presenter since 2010 as well as a regular presenter of the entire show.
*She is an avid supporter of English Fooltball Club, Middlesbrough F.C..
*She has a Star Tattoo on the back of her neck.
*Follow her on Twitter and Facebook.