Steven Van Zandt is an American musician, actor as well as human rights activist. He is best known as the lead guitarist for Bruce Springsteen’s E Street Band. He also plays mandolin for the band. As an TV actor, he is known for his roles in HBO’s The Sopranos and Lilyhammer. Steven was born as Steven Lento to William Brewster Van Zandt and Mary H. Lento, on November 22, 1950 in Winthrop, Massachusetts, USA. He belongs to Southern Italian descent. He married actress Maureen Van Zandt in December 1982. 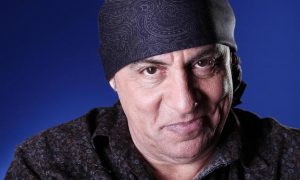 Steven Van Zandt Facts:
*He is of Southern Italian descent.
*He cites guitarist Dave Clark Five as influences.
*His wife Maureen Van Zandt played his wife Gabriella Dante in the TV series The Sopranos.
*He always wears a bandana because a car accident when he was younger left him with head scarring and patches on his head where hair would not grow properly.
*Follow him on Twitter and Facebook.

“The simple fact is we do not live in a democracy. Certainly not the kind our Founding Fathers intended. We live in a corporate dictatorship represented by, and beholden to, no single human being you can reason with or hold responsible for anything.” – Steven Van Zandt