Chinese model and actress who was the first East Asian model to open a Ralph Lauren runway show and the second model of Chinese descent to walk in the Victoria’s Secret Fashion Show. She appeared in five Victoria’s Secret Fashion shows from 2011 through 2015, and has been a face of Shiseido since 2012. Sui He has appeared on the cover or has been featured in many international fashion magazines including Vogue, Elle, Marie Claire, Allure, Harper’s Bazaar, Glass, V and W among others. She was selected to be the first Asian global spokesmodel for Shiseido in 2012. Sui He was part of the cast of the 2015 film You Are My Sunshine. 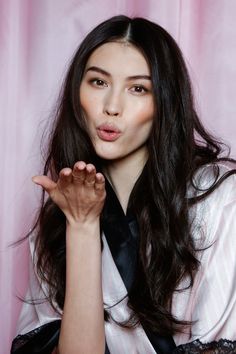 Sui He Education:
She has completed her education in 2010.

Sui He Facts:
*She was born on September 23, 1989 in Wenzhou, China.
*She grew up a swimmer and was a member of her city’s swim team for seven years.
*At the age of 17, Sui He entered a Chinese modeling contest and won.
*She made her runway debut at the Love, Sex, and Money runway show in the Spring/Summer 2011 runway season.
*Her first campaign was Bruno Cucinelli Spring/Summer 2011, and her first major campaign was Ralph Lauren in Fall/Winter 2011.
*She became the second model from China or Chinese descent to walk in the Victoria’s Secret fashion show after Liu Wen.
*She became the first Asian model to open a Ralph Lauren runway show.
*She is best friends with models Nadja Bender and Shu Pei.
*Follow her on Twitter and Instagram.