Sully Erna is an American singer, songwriter and musician who has been the vocalist and rhythm guitarist for the Boston-based rock band Godsmack since the mid-1990s. With Godsmack, Sully released a self-titled four-time Platinum-selling debut album in 1998. He is also a harmonica player, drummer and percussionist, performing these on albums and at live shows. Erna was ranked #47 in the Top 100 Heavy Metal Vocalists by Hit Parader. 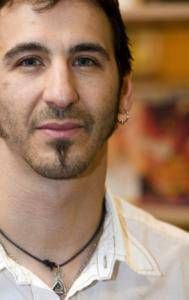 Born Salvatore Paul Erna Jr. on February 7, 1968 in Lawrence, Massachusetts, his father, Salvatore Erna Sr., was a trumpet player from Sicily and would rehearse in the basement where Sully would watch. Erna’s great-uncle was a famous composer in Sicily. He has been married to JoAnna Wortham since April 24, 2014. He has a daughter named Skylar.

Sully Erna Facts:
*He was born on February 7, 1968 in Lawrence, Massachusetts, USA.
*He began playing drums at the age of three.
*He started teaching himself how to play music by ear when he was eleven years old.
*He was ranked #47 on the Top 100 Heavy Metal Vocalists list by Hit Parader.
*Visit his official website: www.sullyerna.com
*Follow him on Twitter, SoundCloud, Facebook and Instagram.