Sunil Shetty is an Indian film actor who appears in Bollywood films. He has worked in over 110 films. His notable film credits include Dilwale, Mohra, Rakshak, Hera Pheri, Krishna, Gopi Kishan, Sapoot, Anth, Main Hoon Na, Phir Hera Pheri, Yeh Teraa Ghar Yeh Meraa Ghar, Dhadkan, Border, Bhai, and No Problem. For his performance in 2000 film Dhadkan, he won the Filmfare Award for Best Villain. Sunil Shetty was born Sunil Veerappa Shetty on August 11, 1961 in Bangalore, Karnataka, India to Veerapa Shetty. He has a sister named Sujata. He married to Mana Shetty in 1991. They have two children, Athiya Shetty and Aahan Shetty. 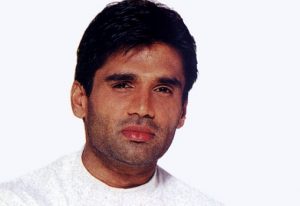 Sunil Shetty Facts:
*He made his debut in 1992 with Balwaan.
*He has changed his name to Suniel Shetty.
*He is a black belt in Full Contact Kick Boxing.
*His favourite Bollywood actor is Amitabh Bachchan.
*Follow him on Twitter and Facebook.