American actress Courtney Thorne-Smith is most famous for her portrayal of Alison Parker on the television series Melrose Place, Georgia Thomas on Ally McBeal, and Cheryl in According to Jim. She is also known for her recurring role as Lyndsey McElroy on Two and a Half Men. Courtney was born on November 8, 1967 as Courtney Thorne Smith in San Francisco, California to Lora Smith and Walter Smith. Her mother, Lora Thorne, was a therapist and her father, Walter Smith, was a computer market researcher. She has a sister, Jennifer, who is an advertising executive. She married Roger Fishman in January 2007. Together they have one son, Jacob Emerson Fishman. She was previously married to Andrew Conrad from 2000 to 2001. 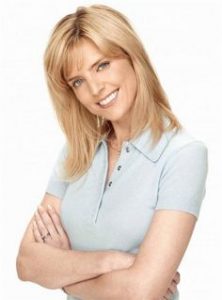 Courtney Thorne-Smith Facts:
*Her parents separated when she was seven years old.
*She has a sister, Jennifer, who is an advertising executive.
*Her ex-husband, Andrew, is a genetic scientist.
*She is a vegetarian.

“I got out of autobiography because my story is, I was famous, it was hard for me, I got into therapy. I had trouble with food, I got a nutritionist. There’s no story there.” – Courtney Thorne-Smith