Talitha Bateman is an American actress. She is best known for her role as Scarlett Kincaid on The CW’s TV drama series Hart of Dixie. Her other notable works include Nine Lives, So B. It, Geostorm, and The Hive. She made her first professional acting credit in the 2012 film George Biddle, CPA. In 2013, she had a guest starring role on the ABC sitcom The Middle. Born in Turlock, California, on September 4, 2001, to Jonelle and Tim Bateman, she has eight siblings, four older brothers, Justin, Aleq, Noah E. Bateman, and Judah Bateman, a little brother, Gabriel Bateman, and two older sisters, Hannah Rochelle Bateman and Leah Bateman. 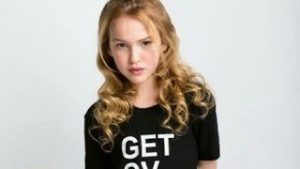 Talitha Bateman Facts:
*She’s the eighth of nine children.
*She appeared alongside Jaime King and Rachel Bilson in Hart of Dixie.
*She played Kayla in the science fiction horror film The Hive.
*Follow her on Twitter, Facebook and Instagram.