Tamira Paszek is an Austrian professional tennis player. On 11 February 2013, she reached her best singles ranking of world no. 26. Turning professional on 26 October 2005 at age 15, she has won three singles titles on the WTA tour, as well as three singles and three doubles titles on the ITF circuit in her career. As a junior, she reached the final of the 2005 Girls’ Singles Championship at Wimbledon and at the US Open – Girls’ Singles in 2006. Born Tamira Shelah Paszek on December 66, 1990 in Dornbirn, Austria, to Françoise Paszek and Ariff Mohamed, Tamira began playing tennis at age 4½. 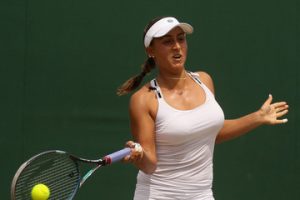 Tamira Paszek Facts:
*Her father is a Tanzanian-born, Kenyan-raised Canadian of Indian descent; and her mother is a Chilean-born Austrian of Polish and French descent.
*She started hitting tennis balls at age four-and-a-half.
*She was introduced to tennis by her mother.
*She turned professional on 26 October 2005.
*Follow her on Twitter, Facebook and Instagram.