Calum Worthy is a Canadian actor, writer and producer born in Victoria, British Columbia. He is known for his performance as Dez on the Disney TV series Austin and Ally and The Coppertop Flop Show. He is the recipient of several accolades, including two Young Artist Awards in the Leading Young Actor category for his performances in Thanksgiving Family Reunion and Stormworld. He also received the Leading Actor award at the 2010 Leo Awards for his performance in Stormworld. Since 2017, he has starred in the American television mockumentary series American Vandal. Born on January 28, 1991 in Victoria, British Columbia, Canada, to Sandra Webster and David Worthy, he became interested in acting after watching Home Alone when he was only 4 years old. He made his screen debut when he was nine years old, appearing in Fox’s Night Visions. 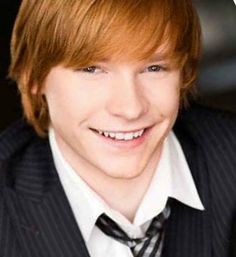 Calum Worthy Facts:
*He is an only child.
*He has been performing on stage since the age of five.
*He has been playing piano since age 4.
*He was named one of “11 To Watch In 2011” by TV Guide.
*He has dual citizenship of British and Canadian.
*Follow him on Twitter and Instagram.