Taylor Armstrong is an American television personality and author, best known as a star of the American reality-television show The Real Housewives of Beverly Hills. She was a cast member for the first three seasons of Bravo’s The Real Housewives of Beverly Hills. In January 2014, Armstrong was cast for the fourth season of Couples Therapy. Born Shana Lynette Hughes on June 10, 1971 in Independence, Kansas, she was educated at Union High School in Tulsa, Oklahoma. In October 2005, she married venture capitalist Russell Armstrong with whom she had a daughter named Kennedy before Taylor filed for divorce on grounds of severe domestic abuse. Russell committed suicide in 2011. Since April 4, 2014, she has been married to lawyer John Bluher. 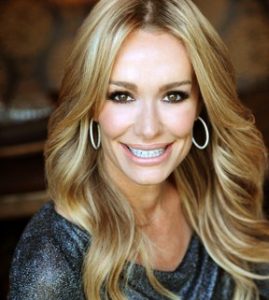 Books: Hiding from Reality: My Story of Love, Loss, and Finding the Courage Within

Taylor Armstrong Facts:
*She was born on June 10, 1971 in Independence, Kansas, USA.
*Her real name is Shana Lynette Hughes.
*She was a cheerleader in high school.
*She graduated from Union High School in 1989.
*She debuted on Bravo’s The Real Housewives of Beverly Hills in 2010.
*Her husband, Russell Armstrong, committed suicide by hanging himself on August 15, 2011 at the age of 47. At the time of his death, they were divorcing.
*Visit her official website: www.taylorarmstrong.com
*Follow her on Twitter, Facebook and Instagram.