Taylor Momsen is an American singer, songwriter, former actress, and model. She is known for her portrayal of Cindy Lou Who in the film How the Grinch Stole Christmas, and for her role as Jenny Humphrey on The CW’s teen drama series Gossip Girl. Momsen became widely known for being the lead singer and songwriter of the American rock band The Pretty Reckless after her retirement from acting. Born Taylor Michel Momsen on July 26, 1993 in St. Louis, Missouri, to parents Collette and Michael Momsen, her younger sister, Sloane Momsen, is also an actress. She was educated at Our Lady of Lourdes Catholic School and Herbert Hoover Middle School in Potomac, Maryland. She also studied dance at the Center of Creative Arts in St. Louis. 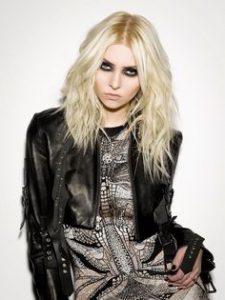 Taylor Momsen Facts:
*She was born on July 26, 1993 in St. Louis, Missouri, USA.
*She was signed with Ford Models at a very young age.
*She began acting professionally at age three appearing in a commercial for Shake n’ Bake.
*She was nominated for a Blockbuster Entertainment Award for Favorite Female Newcomer for her work in How the Grinch Stole Christmas.
*She signed to IMG Models in June 2008, at age 14.
*She became the frontwoman of the band The Pretty Reckless in 2009.
*Some of her influences are Kurt Cobain, Chris Cornell, the Beatles, AC/DC, Led Zeppelin, the Who, Pink Floyd, Marilyn Manson, Oasis, and Shirley Manson of Garbage.
*Her idols are Robert Plant, John Lennon and Kurt Cobain.
*The Beatles, Oasis, Led Zeppelin, Audioslave, Soundgarden and Nirvana are her favorite bands.
*Visit her band’s official website: www.theprettyreckless.com
*Follow her on Twitter, Facebook and Instagram.