Terence Crawford is an American professional boxer. He is a multiple world championships in three weight classes, including the WBO welterweight title since June 2018; previously he held the WBO, Ring magazine and lineal lightweight titles from 2014 to 2015; and the unified WBA (Super), WBC, IBF, WBO, Ring and lineal light welterweight titles between 2015 and 2017. In 2014, Terence was named Fighter of the Year by the Boxing Writers Association of America, and by ESPN in 2014 and 2017. Born Terence Allan Crawford on September 28, 1987 in Omaha, Nebraska, USA, to parents Debbie and Terry Crawford, he has two sisters named Shawntay and Latisha. Crawford was introduced to boxing at the age of seven and turned professional in March 2008. He has a son, Terence Crawford III. 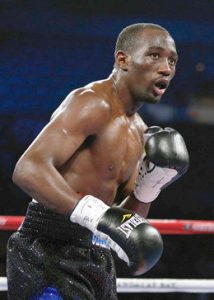 Terence Crawford Facts:
*She was born on September 28, 1987 in Omaha, Nebraska, United States.
*His father, grandfather, uncles and cousins all trained at C.W. Boxing Club.
*He turned pro in March 2008.
*He became the WBO Lightweight Champion in March 2014.
*He is ranked as the world’s second-best active boxer as of May 2018.
*His hobbies includes basketball and video games.
*Follow him on Twitter and Facebook.