Thalia is a multi-award-winning Mexican singer, songwriter, and actress. She is one of the most popular and influential Mexican singers worldwide. She is the recipient of several accolades, including four Latin Billboard awards. She has sung in various languages In addition to her native Spanish, including English, French, Tagalog, and Portuguese. As an actress, she is best known for her portrayal of dirt poor and uneducated characters who rise against adversities in her soap operas even though Thalia comes for a highly privileged family background in Mexico City. The youngest of five children of Ernesto Sodi Pallares and Yolanda Miranda Mange, Thalia was born on August 26, 1971 in Mexico City, Distrito Federal, Mexico as Ariadna Thalía Sodi Miranda. Since December 2, 2000, she has been married to Tommy Mottola. Together they have two children. 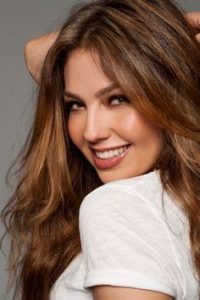 Thalia Facts:
*She is the youngest of five children of her parents.
*She started taking ballet classes at the National Conservatory of Music of Mexico at age four.
*She is fluent in French.
*She was a member of the pop group Timbiriche.
*She is the 3rd wife of producer Tommy Mottola.
*Since 2004, she has been an official celebrity ambassador for March of Dimes.
*Visit her official website: www.thalia.com
*Follow her on Twitter, YouTube, Myspace, Facebook and Instagram.