Thandie Newton is a British actress, best known for her roles in the films Beloved, RockNRolla, W., The Pursuit of Happyness, 2012, Solo: A Star Wars Story, Crash, and Mission: Impossible II. In 2016, Newton began starring in HBO science fiction drama series Westworld, for which she earned a Primetime Emmy Award for Outstanding Supporting Actress in a Drama Series and two Critics Choice Awards, as well as Golden Globe Award, Saturn Award, and Screen Actors Guild Award nominations. Her other television credits include ER, Rogue, The Slap, and Line of Duty. Born Melanie Thandiwe Newton on November 6, 1972 in Westminster, London, to Zimbabwean mother Nyasha, and British father Nick Newton, she was raised in Africa, London and Penzance. In 1998, Newton married English writer/director/producer Ol Parker, with whom she has three children. 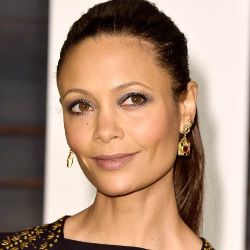 Thandie Newton Facts:
*She was born on November 6, 1972 in Westminster, London, UK.
*She studied social anthropology at Downing College in Cambridge.
*In 2002, she was ranked #48 in Stuff magazine’s “102 Sexiest Women in the World”.
*She is vegan and was named PETA’s “Sexiest Vegan of 2014” in the UK.
*She has suffered from bulimia.
*Follow her on Twitter, Facebook and Instagram.