Tinashe is an American singer-songwriter, dancer, record producer, and actress who was a member of the pop girl group the Stunners from 2007 until 2011. Her 2014 single “2 On” featuring Schoolboy Q peaked at #21 on the US R&B chart. Her debut studio album, Aquarius (2014), was noted by music critics as one of the most “solid” debuts by a new female artist in years. Tinashe’s most known roles included as a motion-capture model in the animated film The Polar Express, Robin Wheeler in the Cartoon Network television series Out of Jimmy’s Head, and a recurring role in the CBS series Two and a Half Men. She competed on Dancing with the Stars in 2018. 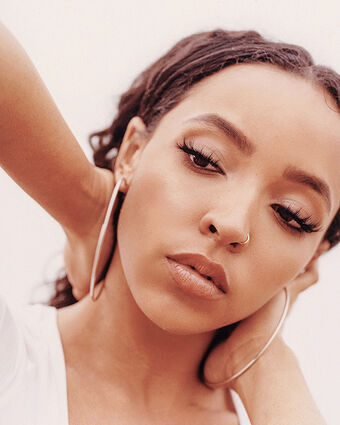 Born Tinashe Jorgensen Kachingwe on February 6, 1993 in Lexington, Kentucky, to parents Aimie and Michael Kachingwe, she moved to Los Angeles when she was 8 years old. Her father is a native of Zimbabwe and her mother is of Irish, Danish, Norwegian, and English descent. Tinashe dated NBA player Ben Simmons in from 2017 to 2018.

Tinashe Facts:
*She was born on February 6, 1993 in Lexington, Kentucky, USA.
*She began modeling and acting when she was 3 years old.
*Her first song, written when she was 5, was called ‘Deep in the Night.’.
*She was a member of a girl band called The Stunners from 2007 to 2011.
*Her first solo YouTube cover was of Lil Wayne’s ‘How to Love.’.
*She is a huge Harry Potter fan.
*Janet Jackson, Michael Jackson, Sade, Britney Spears, and Christina Aguilera are her musical inspirations.
*She has a black belt in Taekwondo.
*She speaks the Shona language fluently.
*Visit her official website: www.tinashenow.com
*Follow her on Twitter, SoundCloud, Facebook and Instagram.