Tom Wu is a Hong Kong British actor and martial arts expert who is known for portraying Liu in Shanghai Knights (2003), Lord John in Revolver (2005), Bhutanese Prison Guard #1 in Batman Begins (2005), Genghis Carnage in Kick-Ass 2 (2013), Hundred Eyes in Netflix’s Marco Polo (2014–16) and Akaashi in the 2011 Bollywood superhero film Ra.One. He portrayed Sir George, King Arthur’s mentor in the 2017 film King Arthur: Legend of the Sword. Born on May 15, 1972 in Hong Kong, he was raised in Chinatown, London. At age 10, Tom began practicing Martial Arts such as Hung Gar, Karate and Wing Chun and later took up acrobatics. In 1988 he competed for Britain at China’s International Wu-Shu (Martial Arts) Tournament and was awarded two Bronze Medals, and a Gold Medal. 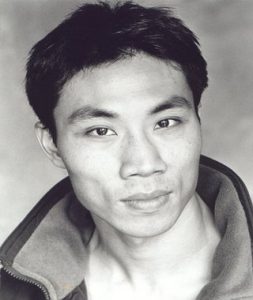 Tom Wu Facts:
*He was born in Hong Kong and grew up in Chinatown, London.
*He began practicing Martial Arts at age 10.
*He is one of the founding member of Yellow Earth Theater, which was established in 1995.