Tomas Berdych is a Czech former professional tennis player. He achieved his career’s best ranking on May 18, 2015, which was #4. He reached the final of the 2010 Wimbledon where he was defeated by Rafael Nadal. He turned professional in 2002, and has reached the semifinals of all four Grand Slams. On November 16, 2019, Berdych announced his retirement from tennis at the Nitto ATP Finals. Berdych was born on September 17, 1985 to Hana Berdychová and Martin Berdych. He has been married to Ester Satorova since 2015. 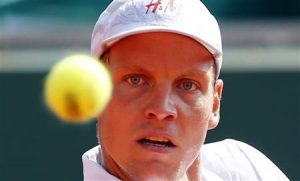 Tomas Berdych Facts:
*He turned professional in 2002.
*He has reached the semifinals of all four Grand Slams.
*He was appeared on ESPN The Magazine Body Issue in 2014.
*He is a huge fan of ice hockey, and his favorite team is the Detroit Red Wings.
*Follow him on Twitter, Facebook and Instagram.