Toni Garrn is a German model who got her break into the fashion industry after signing an exclusive contract with Calvin Klein in 2008. She has appeared on the cover of fashion magazines such as Vogue, Muse, Elle, Numéro, Glamour, Marie-Claire, Another Magazine, Harper’s Bazaar among others. In 2011, she modeled for Victoria’s Secret for their PINK clothing line and also did catwalk for this lingerie giant. She has worked with world’s leading photographers such as Steven Meisel, Peter Lindbergh, Camilla Åkrans, Ellen von Unwerth, Mert and Marcus, Victor Demarchelier, David Bellemere, Karl Lagerfeld, Manfred Baumann, Paolo Roversi, Mariano Vivanco, Miles Aldridge, Craig McDean, Corinne Day, Greg Kadel and Mario Testino. Born Antonia Garrn on July 7, 1992 in Hamburg, Germany, she has an older brother, Niklas, who is also a successful model. Garrn was discovered by a model scout for Modelwerk in 2006 during FIFA World Cup 2006 in Hamburg, and then signed with New York agency Women Management. She dated with actor Leonardo DiCaprio from 2013 to 2014. In 2015, she began dating American basketball player Chandler Parsons. Their relationship lasted until November 2016. 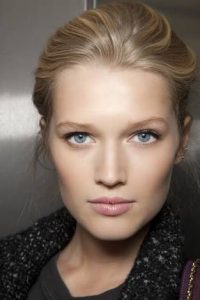 Toni Garrn Facts:
*She was born in Hamburg, West Germany on July 7, 1992.
*She is a classical pianist.
*She is fluent in English, German and a bit of Greek and French.
*She is best friends with model Ali Stephens.
*She is friends with fellow models Karlie Kloss, Kendra Spears, Kasia Struss, Jourdan Dunn, Sigrid Agren, Andreea Diaconu, Ginta Lapiņa, Constance Jablonski and Taryn Davidson.
*Visit her official website: www.tonigarrn.com
*Follow her on Twitter, Facebook and Instagram.