Halston Sage is an American actress of film and television. Sage achieved recognition starring in the Nickelodeon series How to Rock, where she played Grace King. She is also known for portraying Amber Fitch on the series Crisis, as Lacey in the film Paper Towns, and as Lt. Alara Kitan on the FOX television series The Orville. She played Lindsay Edgecomb in the 2017 teen drama film Before I Fall. Born Halston Jean Schrage on May 10, 1993 in Los Angeles, California, to Lenny and Tema Schrage, she has two younger siblings, a sister named Kate, and a brother named Max. She belongs to Jewish heritage. She began working as a model at the age of fourteen. Her television career started in 2011 with smaller role on show Victorious. 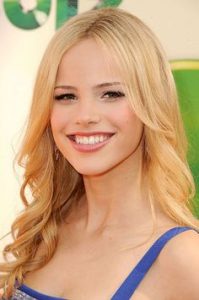 Halston Sage Facts:
*She was born on May 10, 1993 in Los Angeles, California.
*She wanted to be a dentist as a child.
*She rode horses for eight years and is an award-winning equestrian.
*Follow her on Twitter, Facebook and Instagram.