Tonya Evinger is an American mixed martial artist who is the former Invicta bantamweight champion. She is currently signed to Ultimate Fighting Championship. Tonya has two younger twin brother, Chris, and Owen, who are also profession mixed martial artist. She was a nominee for Best Female Fighter at the 2016 World MMA Awards. 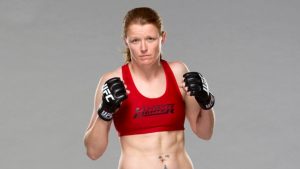 Tonya Evinger Education:
She earned a BA in Criminal Justice.

Tonya Evinger Facts:
*She wrestled at Missouri Valley College in Marshall, Missouri.
*Competed for EliteXC, Raging Wolf, and Invicta Fighting Championship.
*She has also faced Alexis Davis, Gina Carano.
*She gas never been stopped via strikes.
*She was a nominee for Best Female Fighter at the 2016 World MMA Awards.
*Her mom is her hero who helped her get to where she is today.
*Follow her on Twitter.