Travis Tritt is an American country music singer, songwriter, and actor. He is famous for his bluesy, rock-and-roll country songs. His hit singles include “Help Me Hold On,” “Anymore,” “Can I Trust You with My Heart,” “Foolish Pride”, and “Best of Intentions”. Tritt won two Grammy Awards, both for Best Country Collaboration with Vocals: in 1992 for “The Whiskey Ain’t Workin’,” a duet with Marty Stuart, and again in 1998 for “Same Old Train”, a collaboration with Stuart and nine other artists. Born James Travis Tritt on February 9, 1963 in Marietta, Georgia, to parents Gwen and James Tritt, he has one sister, Sheila. Tritt recorded his first demos with Warner Bros. Records. His 1991’s album It’s All About to Change went multi-platinum. Since 1997, he has been married to Theresa Nelso, with whom he has three children. He was previously married to Karen Ryon and Jodi Barrett. 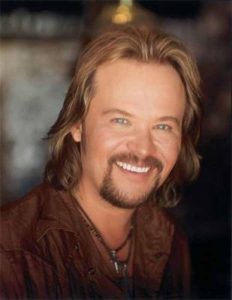 Travis Tritt Facts:
*He was born on February 9, 1963 in Marietta, Georgia, USA.
*He used to work as a supermarket clerk at a furniture store and during his teen years.
*He released his debut album, ‘Country Club’, in 1990.
*In the 1990s he had three #1 singles and a string of platinum albums.
*He has his own music publishing company, ‘Post Oak’.
*He was married and divorced twice before he was 22.
*Visit his official website: www.travistritt.com
*Follow him on Twitter, Youtube, Facebook and Instagram.