Tricia Helfer is a Canadian actress and model. Helfer is most famous for her portrayal of the humanoid Cylon Number Six in the sci-fi television show Battlestar Galactica television series (2004–2009). She also provided the voice for Sarah Kerrigan in the Starcraft 2 trilogy. As a model, she worked for known brands like Versace, Chanel, and Dolce & Gabbana. Born Tricia Janine Helfer on April 11, 1974 in Donalda, Alberta, to Elaine and Dennis Helfer, she belongs to German, English, Swedish and Norwegian descent. She has three sisters, Tammy Helfer, Trina Helfer and Tara Helfer. She was discovered at age 17 by a modeling agency scout. She got married to lawyer Jonathan Marshall in 2004. 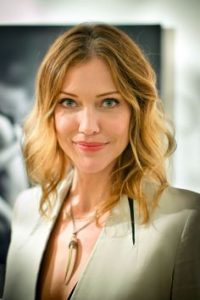 Tricia Helfer Facts:
*She was born and raised in Donalda, Alberta, Canada.
*She is of German, English, Swedish and Norwegian descent.
*She was scouted by modeling agent at age 17.
*In 1992, she won Ford’s “Supermodel of the World” contest.
*She posed for the February 2007 issue of Playboy.
*She was ranked #83 on the Maxim magazine “Hot 100 of 2005” list.
*She was named the 8th sexiest woman in the world in 2008 by FHM.
*When she was younger, she briefly dated Sylvester Stallone.
*Visit her official website: www.triciahelfer.com
*Follow her on Twitter, Facebook and Instagram.