Tua Tagovailoa is an American football quarterback for the Alabama Crimson Tide. He was named the Offensive MVP of the National Championship with 166 passing yards and 3 touchdown passes. Born Tuanigamanuolepola Tagovailoa on March 2, 1998 in Ewa Beach, Hawaii, to parents Diane and Galu Tagovailoa, he has three younger siblings. His father began training him at the age of two and forced him to begin throwing with his left hand instead of his right. In 2017, Tagovailoa was the top-ranked high school football player in the class of 2017 and attended Saint Louis School in Honolulu, Hawaii. 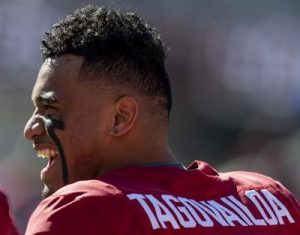 Tua Tagovailoa Facts:
*He was born on March 2, 1998 in Ewa Beach, Hawaii, USA.
*He graduated from Saint Louis School in Honolulu, Hawaii.
*His younger brother, Taulia, and cousins, Adam Amosa-Tagovailo and Myron Tagovailoa-Amosa, are also football players.
*Follow him on Twitter and Instagram.