Tyne Daly is an award-winning American actress of film, theater, and television. She is best known by the public for her roles as Det. Mary Beth Lacey on Cagney & Lacey, as Maxine Gray on Judging Amy, and as Alice Henderson on Christy. She is the recipient of several accolades, including six Emmy Awards and a Tony Award, and is a 2011 American Theatre Hall of Fame inductee. Born Ellen Tyne Daly on February 21, 1946 in Madison, Wisconsin, she is the daughter of actors James Daly and Hope Newell. She belongs to Irish, English, Scottish, and German descent. Her siblings are Tim Daly, Pegeen Michael and Glynn Daly. She married George Stanford Brown in 1966 and the couple had three daughters, Kathryne Dora, Alyxandra Beatris and Alisabeth, before divorcing in 1990. 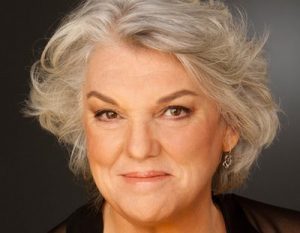 Tyne Daly Facts:
*She is the daughter of actors James Daly and Hope Newell, and older sister of actor Tim Daly.
*She is a graduate of the American Musical and Dramatic Academy.
*She won a Tony Award for Best Performance for her role in the 1989 stage play Gypsy: A Musical Fable.