Tyra Banks is an American television personality, actress and former supermodel. She was the first African American model to appear on the cover of GQ and the Sports Illustrated Swimsuit Issue twice. She was a Victoria’s Secret Angel from 1997 to 2005. Banks is also known for hosting the reality TV program America’s Next Top Model and her own talk show, The Tyra Show, for which she won two Emmy Awards. Born Tyra Lynne Banks on December 4, 1973 in Inglewood, California to Carolyn London and Donald Banks, she has an older brother named Devin. She attended John Burroughs Middle School and graduated from Immaculate Heart High School in 1991. She signed a modeling contract with the Elite Agency at the age of 15. She was in a relationship with Erik Asla from 2013 to 2017. They have a son, York Banks Asla born in 2016. 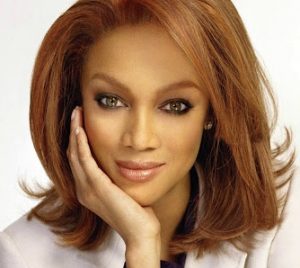 Tyra Banks Facts:
*She was born on December 4, 1973 in California, USA.
*Her parents divorced when she was six years old.
*She does not drink alcohol.
*Oprah Winfrey is her role model.
*She is the CEO of her own company, TYInc.
*People Magazine named her one of the top 50 Most Beautiful People in the World in 1994.
*She was named “Woman of the Year” for 2000 by Sports Illustrated.
*She is friends with Will Smith, Rebecca Romijn, Steve Harvey, Heidi Klum, Paulina Porizkova, and Jamie Lee Curtis.
*She was in a relationship with NBA player Chris Webber from 2001 to 2004.
*Visit her official website: www.tyra.com
*Follow her on Twitter, YouTube, Google+, Facebook and Instagram.