Richel Hogenkamp is a Dutch tennis player who turned professional in 2009. Hogenkamp has a WTA singles career high ranking of 94 achieved on 24 July 2017. She defeated Svetlana Kuznetsova in a 2016 Fed Cup World Group tie, which lasted exactly four hours, the longest match in the history of Fed Cup. Hogenkamp was born on April 16, 1992 in Doetinchem, Netherlands. She became three times Dutch champion, in 2009, 2014 and 2015. 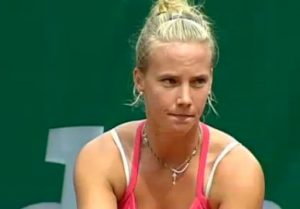 Richel Hogenkamp Facts:
*She was born in Doetinchem, Netherlands on April 16, 1992.
*She turned professional at age of 17.
*On 24 July 2017, she reached her best singles ranking of world number 94.
*She beat top-seeded Julia Görges at the 2012 Gastein Ladies.
*She won longest ever Fed Cup Match Over Kuznetsova in 2016.
*Her hobbies include Travelling, reading, spending time with friends and family and Series/Movies.
*Follow her on Twitter.